I tried to hold off. Really. I did. But I had a lot of free time today and I ended up pulling out a couple things I've been collecting for Halloween. I just can't wait for this Fall weather to actually FEEL like Fall weather (wasn't Sunday just wonderful?! Gimme more of that).
I rearranged the pictures I had on the wall behind the couch and above the fireplace. I just did a little switch-a-roo. We'll see if I like the feel of it for a little while. It always takes a little time, especially since our picture of Christ is so rich and dark in colors, while my Bird Canvas Art is light. 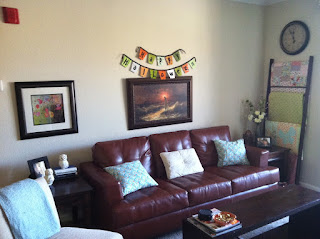 This is the banner I just finished sewing today! Still thinking if this is the right place for it, but for now, it stays. My M.I.L. gave the kit to me and I'm happy with how it turned out! I'm glad my pillow covers I sewed (pictured above) also have a little bit of orange in the pattern. 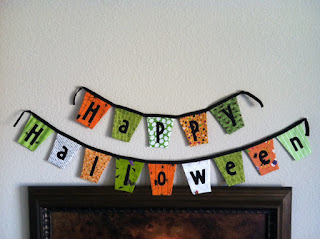 And here is where my canvas art ended up. I also had those orange, PUMPKIN SPICE candles. Much better contrast than when my picture of Christ was above the fire place. And I love those rich, fall scents... mmm, so warm and cozy. 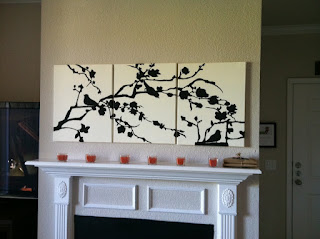 The dining area needed a little something. I hung 3 tissue balls above the table. I like it. Also, you can see my frames. THAT took a long time to get used to. I still look at it and think of other things I could do. 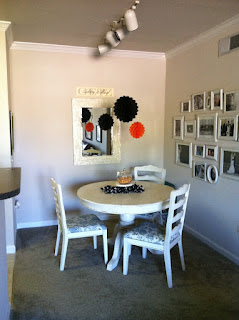 I sewed a Halloween themed table runner this morning also and bubbled it on the table since I don't really like the look of table runners on a round table. And of course the glass pumpkin with candy corn. THE candy of Halloween. 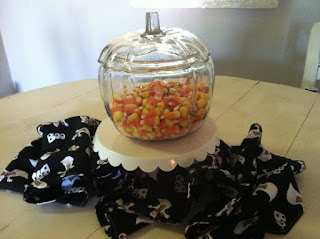 I have other ideas, but I can't get ahead of myself here! This is very minimal decor but enough to make it feel festive. I'm satisfied for it being September 27th.
Posted by Ashley at 12:33 PM No comments:

you are not forgotten

"Sisters, wherever you are, whatever the circumstances

may be, you are not forgotten. No matter how dark

your days may seem, no matter how insignificant you

may feel, no matter how overshadowed you think you

may be, your Heavenly Father has not forgotten you. In

fact, He loves you, with an infinite love."

-President Uchtdorf
Posted by Ashley at 8:19 PM No comments:

So I was going through and adding labels to some of my posts, mostly my DIY posts, and for some reason, it moved two old posts to the front of the pack! Weird. Hopefully it will correct itself but oh well!

Anyone else loving this fall weather today? Too bad it's supposed to get hot again! I am dying for pumpkins, and scarves, and holiday decor! Pinterest is giving me a laundry list of ideas! Follow me and see what I mean :)
Posted by Ashley at 7:05 PM No comments:

Ever since we started dating, Max has raved about the Giants. He has told me time and time again that he HAS to take me to a game. He said it when we were dating, when we were engaged and when we got married. And I still hadn't been to one!

Well, I decided enough is enough! I picked a date and time and bought the tickets to the May 9th game against the Arizona Diamondbacks. It was very cold and we were sitting up on the highest deck. But it was so fun! We bundled up, brought snacks... bought clam chowder in bread bowls(so good) and cheered on the Giants.

I was thrilled that the Giants won for my first game to see them live (of course, they knew I was putting the pressure on because there would be consequences if they didn't win... ;)) I already want to head back  for another game! Maybe a day game next time. 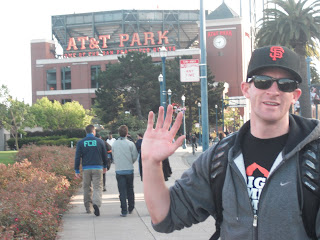 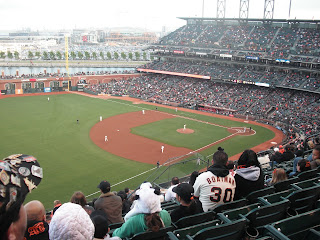 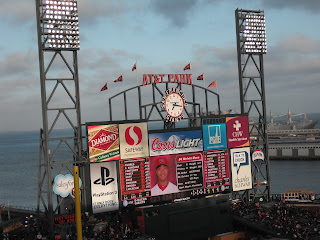 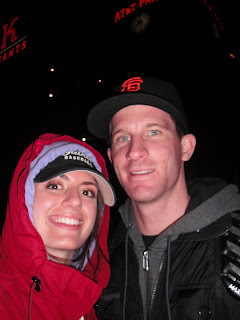 Posted by Ashley at 7:02 PM No comments:

For Mother's Day, I planned on presenting this beautiful, hand-crafted lemon cake, decorated with buttercream hydrangeas in all their perfection. Well... the cake part was great. Not so much the hydrangea part. What I should have done was to look up tutorials on how to pipe the hydrangeas out instead of relying on myself to figure it out from a picture. Not such a bright idea. Way to go, Ashley.

Again, I pulled this recipe from I am Baker. I think I'll forgo the buttercream, flower decor and just go for simple next time I decide to make a cake. I think because the Rose Cake was so easy to make, my ego got a little inflated. Oopsy. 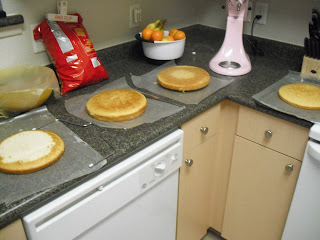 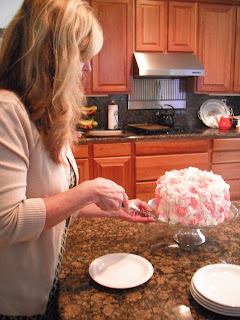 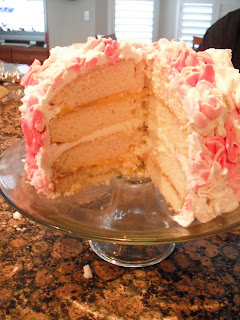 Posted by Ashley at 6:53 PM No comments:

| |  <--- that's how close I came to dropping out of my classes this semester. Go back and look at it again. Yeah, that was close. I did drop my Public Speaking class though, lighten the load, ya know? My Microbiology class is kicking my butt and I want to scream at it. Pretty sure I had a break down yesterday so I can check that off my list...

I even said that I didn't think Nursing was my call in life... maybe it was something else. I wanted something to come naturally to me and let's face it... learning about a bunch of microbial bacteria and fungus and all that other crap just doesn't come naturally! Max said I should finish the semester and see how I feel about it then. I'll probably end up sticking with it if I survive this class. I hear it's the hardest one out of the science classes. True?

Max loves to say that anything worth having is going to be hard. Or any career worth achieving is going to challenge me in the worst way possible. Well... he says something like that. You get it. Right?


Here's to peer pressure! ...and an education. 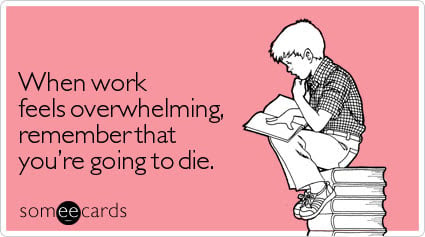 Posted by Ashley at 4:47 PM No comments:

1. I've been employed by my family to do some work. Part of that is landscaping. And that is not an easy job... On the side of my parent's house was this massive hill. I believe it was back filled so it's just a bunch of rock and clay which makes it a work out when digging in it! My mom wanted more function for that space so... we began cutting into it, creating paths and areas for a small garden. It's a work and progress but it's getting there! There's definitely a sense of satisfaction when it's your own sweat going into the project. 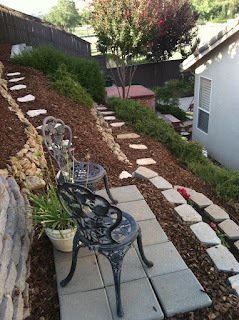 Below is what is left. There were "steps" originally but I began to dig out the top planter box and dumped all the dirt on the side, making it, once again, a hill. I'll post more when I finish :) 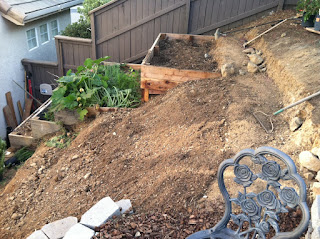 2. This past weekend, I ran in a Ragnar race. What is Ragnar you say? It's a relay race, with a team of 12 runners running a combined distance of about 200 miles. Let me give you one piece of advice:
TRAIN.
That was my biggest downfall when I got to my last leg. I tanked big time. It didn't help that I was wearing black, thick spandex pants, nor that I ran in the sun the entire 7.95 miles, nor that it was a NO VAN SUPPORT leg, nor that the Ragnar team even provided water stations until the last mile... No, No, No.
It. Was. Brutal.
I was a bit stumbly when I came in for the hand-off, but so, so relieved that it was over. My hip and right foot were in pain but I didn't care at that point. I just wanted to sit down in the shade. And I did.

OTHER THAN THAT, it was a great experience. Our van had the most milage out of the 2 vans for our team. We also had the most inconvenient times to run! Which, in my opinion, I'd rather have it that way if I'm going to do a race of this caliber. And what I mean by the most inconvenient times, I mean the hot, afternoon times and the middle of the night times (you know, the times no one typically goes out and runs in anyway).

The midnight runs were a little sketch for some people. Getting hit on, or creepers following you... I luckily had no such thing happen to me. And I felt fairly safe since I could always see the little blinky lights from the runners ahead of me.

Cool story. One of our girls was driving the van to go to the next exchange in the middle of the night and she started to turn the car around. We asked what was up and she said it looked like there was a lost runner. We found her and that girl was definitely lost! You could tell she was so grateful that we stopped to get her and help her get back on the right track. The thing is, none of us in the van would have even noticed. I like to say it was the Holy Ghost guiding her to that runner who, I'm sure, was praying she could find her way back.
I conked out big time when I got home. My body is still sore and my foot still tender, but it kinda feels good to know I pushed my body to the max ;) ha. Thanks, E for sponsoring me!
Posted by Ashley at 8:40 PM No comments:

Email ThisBlogThis!Share to TwitterShare to FacebookShare to Pinterest
Labels: Exercise, Other Projects

So much has been happening, life hasn't been this busy in a long time and gotta say, I'm loving it. What's been going on you say? I'll tell ya.

1. My parents' house flooded so everything is stacked on the tile or stored away in boxes. Yes, the new floors we installed just a matter of 8 months ago had to be ripped up. RIPPED. UP. Needless to say, it will be a long process before the house is normal again. On the upside... this is a great time to purge EXCESS stuff! And I love organizing... don't you get that warm, fuzzy feeling too? 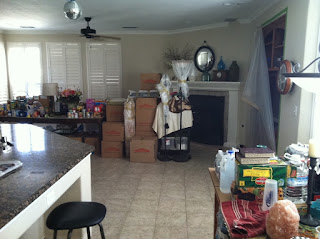 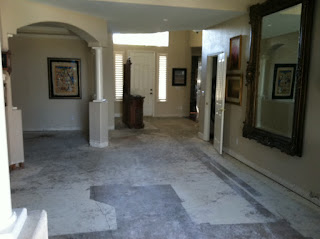 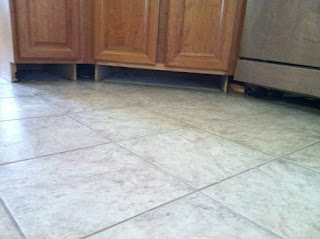 2. I am in the process of painting the frames from our picture wall collage. Yep. All the different colors were kinda bothering me, so I spray painted them white and then applied a brown glaze to make them cream colored, plus a little extra definition in the details of some of the frames. I still need to do more glazing to get the right color so I'll post the AFTER picture when I get there... 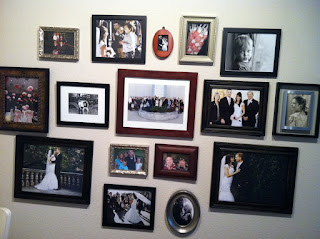 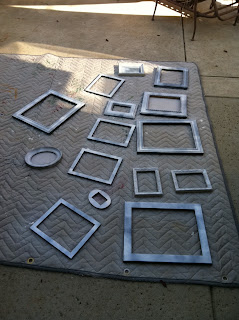 3. I made a bow-tie too small for anyone. Hence the reason it's fit snug on the top of my vase. I can now say I can tie a real bow-tie though! I'm sure I'll make more when I get my little boys ;) I adore bow-ties... 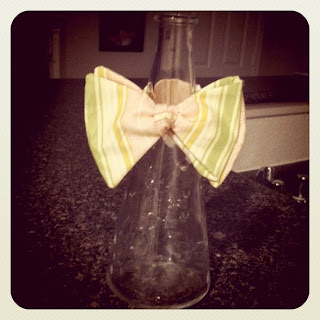 4. Max turned 25 on August 28th! We went down to Paso Robles to visit with the Getz side. It's always fun to go down there and I look forward to it every time. Probably more than he does! haha. Max got in a lot of surfing, I sewed a quilt, we went shopping and out to dinner, and even attended a Cal Poly soccer game per Max's request! It was chilly but fun to do something new.
I also snagged some childhood photos of Max. The one above was taken from my iPhone though and is currently my home screen. I just love seeing that face! It reminds me he was once a sweet little baby haha. Mostly it just lets me fantasize about our own little munchkins for one day... 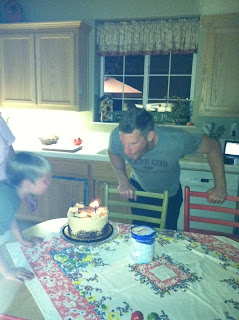 5. Both of us had sisters give birth to boys just days between each other!! Two new nephews and I can't wait to see them, and hold them, and love them.
6. School. Nuff said.

Posted by Ashley at 1:00 AM No comments: